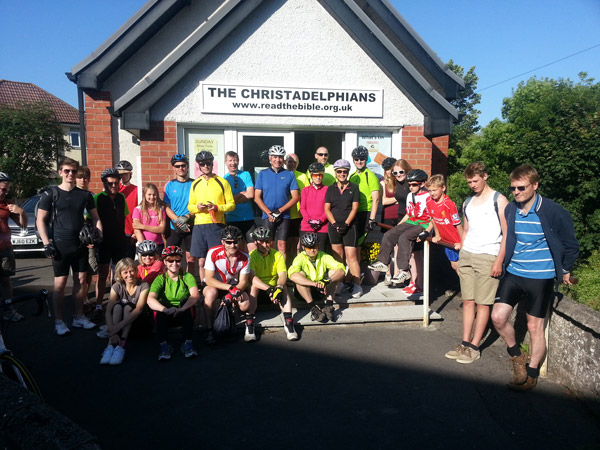 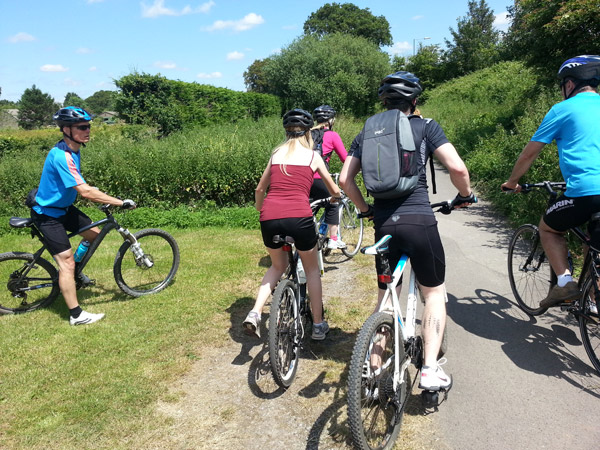 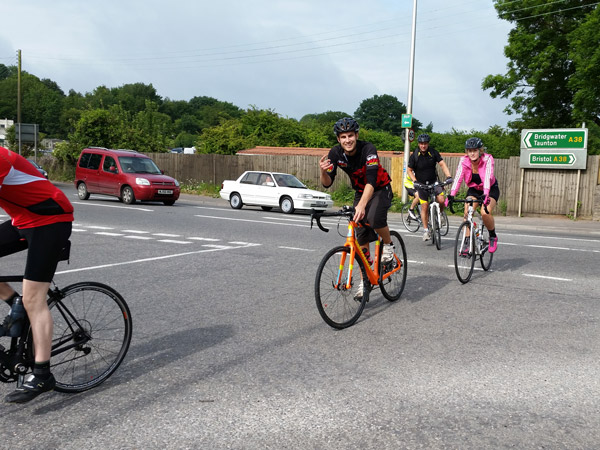 Cycle for Uganda is an annual charity ride organised by the Clevedon Christadelphians to raise money for aid projects in Uganda. Now in its 4th year, the ride revisited its first ever challenge by taking on the whole of the Avon Cycleway (a national cycle route circling Bristol) again – all 85 miles of it! In other years we have taken on the challenge of Cheddar Gorge and some of the toughest hills in the North Somerset.

Very early on Saturday 10th June, nearly 50 cyclists of all abilities and ages sleepily congregated outside the ecclesial hall in Clevedon in preparation for several hours of riding.

Shortly before 8am, we set off under light cloud cover through Clevedon town centre to join the Avon Cycleway, and it wasn't long before the clouds cleared to give us sunshine for much of the first half of the ride.

Heading south-east from Clevedon we crossed the moors and climbed the long hill up to Bristol Airport, before stopping after 15 miles at the beautiful Chew Valley Lake on the edge of the Mendip Hills for refreshments.

Once rested and refreshed, we turned to the north-east, crawled our way over several short, steep hills before following the Bristol to Bath Railway Path for several miles. Generously aided by a stiff tailwind most of the way to our lunch stop, we had made good progress when we arrived at Yate ecclesial hall, slowed down only by a couple of mechanical problems.

Yate Ecclesia provided a fantastic buffet lunch for all the hungry cyclists, who had by now clocked up 41 miles of cycling and at this point several more cyclists joined us to take part in the last 47 miles of the challenge.

With the clouds starting to roll back in, the cyclists rolled back out on to the roads and crossed the exposed Inglestone Common north of Bristol, fighting the strong headwind that would accompany us all the way back to Clevedon.

Tired legs were beginning to show by the time we reached our third stop after 69 miles, with the cyclists swarming round the back of the support car in search of extra sustenance from the large supply of high energy food it carried as it pulled up.

The final section, although mostly flat, wasn't made any easier by the gusty conditions, the increasingly tired muscles and aching bottoms, but even a brief rain shower 10 miles from the finish couldn't dampen the spirits, and the cyclists rolled back into the Clevedon ecclesial hall car park just after 7pm to a fantastic reception and a hot meal.

All the cyclists did exceptionally well, working together throughout the day as a team. In total we cycled 88 miles and climbed over 4,000ft for Uganda and a great day of friendship and fellowship was enjoyed by all.

This year's event raised nearly £7,000 and once gift aid is collected on offline donations next year, this will probably increase to over £7,000!

In previous years we have collected for the Namisindwa Day Nursery, an orphanage that feeds and educates nearly 100 children, and installed a water tank in the village of Ibanda to provide a more reliable source of water during periods of drought. We have continued the water theme and the amount raised will be enough for at least 5 water tanks in various locations in Uganda!

We are already looking forward to next year's event and have started to make plans for the ride which will take place on Saturday 9th June 2018, God willing. More information can be found at http://cycleforuganda.com